Many people with a disability experience bullying.  BeatBullying is holding a Big March on 11th June 2014 to raise awareness of bullying.
They say ‘You can’t always see the pain caused by bullying, but that doesn’t mean it doesn’t hurt’

If you want to see the beatBullying video click here. To sign up for the march click here. I hope people with disabilities who have been bullied and those who want to challenge bullying will  join the march. 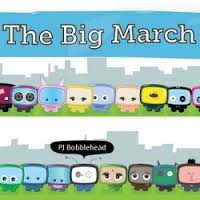 Keith describes here how he beat his bullies.

I’ve had cerebral palsy since birth and I’ll have it until I’m old and grey. There isn’t a day that I’m not reminded I have the condition. And there never will be a day I won’t have it. But in my mind’s eye, life is good: If anything, cerebral palsy has made me a stronger person. I can even say having cerebral palsy has contributed to my success.
I’m in college now. As a teenager with CP it was easy for me to get overlooked, discouraged, or even patronized simply because I wasn’t considered “normal.” This became especially apparent when doctors began prescribing “special devices” to help me re-establish or maintain a “suitable range of motion.” These devices were to be worn while doing everyday activities, including school-time activities.
Because my CP mostly affects my legs and the way I walk, I had to wear knee-high, white-plastic, custom-made leg braces at all times during my first couple of years of secondary school.
Laced with Velcro, these braces locked my ankles and heel cords in a fixed position. Needless to say I hated those braces! They were painful, noisy — thanks to the Velcro and cheap plastic — and they seemed to broadcast that I was “crippled” (my skin crawls when I hear that word).
Fortunately, I have a very mild case of CP and only my walk is affected. My hamstrings and heel cords are spastic (meaning they might twitch or spasm on their own and I can’t control them) or tight. This causes me to walk bent-kneed and on my toes.
For people with more severe cases of CP, all aspects of their physical abilities — and sometimes even mental abilities — can be limited. I was fortunate that my legs were only slightly affected, which allowed me to participate in gym, school sports, and marching band. I was even bold enough to take part in school productions and plays.
There were always the school bullies who found pleasure in bringing me down. Sometimes it felt that the only reason they were in school that day was to be my rain cloud, following me around pointing out my mistakes and flaws.
My bullies were girls as well as guys. They weren’t physically threatening. They were the kind who hurt with words or by forcing an embarrassing situation, constantly looking over a shoulder for supporting chuckles from friends. However, my bullies normally found themselves laughing alone, because I’d already beaten them to the punchline. I was well liked, so the joke was on them. The reality was they had a lot of catching up to do.
A bully can’t compare to what you put yourself through mentally. Just entertaining the thought that you’re not the same as everyone else can work against anyone, even when you know you’re above the norm in so many ways. During school, I never wasted time worrying what other people thought of me. I mostly worked on staying positive and meeting my own standards and expectations.
But there were times when people really got to me — their harassing, hurtful words began to penetrate. A couple of times, I even caught myself thinking, “What if they’re right?” I found this the hardest place mentally to pull myself out of. But I told myself what I knew to be true: “You’re the one who’s right! It doesn’t matter what they think, you know you’re better than them simply because you don’t resort to acting like them. They are making you feel like an outcast so that their pitiful lives don’t look so worthless after all.”
As a teenager, most of our time is spent in school. I found it didn’t do any good to avoid the people who put me in these mental dark places. Instead, I worked on beating them to the punchline, turning the joke on them. This helped me develop a great life skill: the art of the witty comeback.

One thought on “BeatBullying Big March. Make sure disabled people are included.”