General learning disability is different from from specific learning difficulty such as dyslexia which means that the person has one difficulty such as in reading, writing but has no problem with learning in other areas.  It is characterised by generally poor performance in tasks such as learning, short-term memory and problem solving.

A classification of mild, moderate, severe and profound has been used to describe the degree of learning disability. However, this classification is in many ways inappropriate because each person with general learning disability must be assessed and treated as an individual. A person’s degree of intellectual impairment provides very little information about a person’s social, educational and personal needs, and the kind of help and support

About 2% of the population is estimated to have an intellectual impairment. It has been estimated that 1,191,000 people had learning disabilities in England in 2011, including: 286,000 children (180,000 boys, 106,000 girls) aged 0-17. As all children are assessed and monitored in infancy and all children attend school, it is likely that all or almost all of these children are receiving services to support them and their families

The population for people with learning disabilities shows a sharp reduction in prevalence rates after age 49 due to reduced life expectancy. A sharp increase in prevalence for those under 20 may reflect increased survival rates among more severely disabled children.

The number of people with intellectual disabilities increased by 53% over the 35-year period from 1960 to 1995 as a result of improvements in socio-economic conditions, medical  care  and access to services for children

The causes of intellectual impairment include:

Nutritional deficiency such as iodine deficiency.

Damage caused before the child is born by infections such as rubella; or by drugs or alcohol.

Damage caused during labour by prolonged labour, trauma, and deprivation of oxygen

Accidental or non-accidental injury, severe infections, poisoning or malnutrition   in infancy or childhood

Women with some disabilities sometimes risk their health or even their life to have a baby.  What issues does the story below raise for you about disability, sexuality, risk and parenthood? Will  this child be disadvantaged or lucky to have such a determined mother? 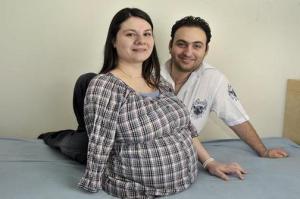 Dankinja Melek was born with no legs and one arm. Though the doctors told her that pregnancy could be dangerous for her, Melek will soon give birth to a child.

The doctors have told me that they are worried about me but I was not nervous, and I believe that it will be all right. I’m eight months pregnant and everything is fine – says Melek who is about to give birth to a boy. The boy currently  weighs three pounds, and Melek and her husband have decided to name him Semih Akin.

Melek says she got pregnant naturally. She added that at first she could not believe she was pregnant, and she made five or six tests to be sure. She admitted that the last two months have been very difficult. During pregnancy I obviously gained a few pounds and therefore generally lie down – Melek said. She is helped a lot to her husband Mehmet who is originally from Turkey. They met a few years ago. At first they were friends, and then they fell in love. They were married six years ago.

Translated and edited by: Matthew Griffiths